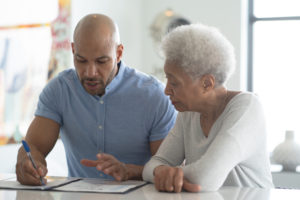 WASHINGTON, D.C., September 1, 2021 – A new report finds that economic inequality continues to grow, with Blacks and Hispanics owning only a sliver of financial assets. Even though the Gen X and Millennial generations are more diverse, whites continue to dominate when it comes to accumulating financial assets. This economic inequality ultimately translates into financial insecurity in retirement, which is exacerbated by the shift from pensions to individual 401(k) savings accounts.

Stark Inequality: Financial Asset Inequality Undermines Retirement Security, released today by the National Institute on Retirement Security (NIRS) is available here. Register here for a webinar on Wednesday, September 8, 2021, at 2:00 PM ET with a review of the research.

The data in this report reveal that among Baby Boomers, Generation X, and Millennials, Black and Hispanic Americans own small percentages of financial assets.

“This stark inequality is even more problematic because the U.S. has largely shifted to a retirement system built around the individual ownership of financial assets in 401(k) or IRA accounts rather than pensions. Few financial assets during one’s working years translates into retirement insecurity later in life,” Bond explained.

He added, “The data also show an alarming reality for Blacks and Hispanics. Not only do they hold a small share of financial assets across generations, that share is falling in some cases. Absent serious policy changes, Blacks and Hispanics are not positioned to improve their economic and retirement outlook.”

This report’s key findings are as follows:

This research is based upon data from the Federal Reserve’s Survey of Consumer Finances (SCF). It examines financial asset ownership by net worth, generation, and race, and considers three generational cohorts: Millennials, Generation X, and Baby Boomers. Millennials are assessed in 2016 and 2019, while Generation X and Baby Boomers are assessed in 2004, 2010, 2016, and 2019.

The research examines financial assets, a broader category than retirement assets. According to the SCF, the category of financial assets consists of liquid assets, certificates of deposit, directly held pooled investment funds, stocks, bonds, quasi-liquid assets, savings bonds, whole life insurance, other managed assets, and other financial assets. It does not include physical assets such as a home or a car. The data for this research is for households rather than individuals.