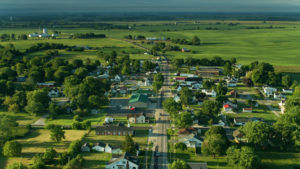 WASHINGTON, D.C., July 12, 2022 – As many small towns and rural communities across America face shrinking populations and growing economic challenges, a new report finds that a positive economic contributor to these communities is the flow of benefit dollars from public pension plans. In 2018, public pension benefit dollars represented between one and three percent of GDP on average in the 2,922 counties in the 43 states studied.

These findings are detailed in a new study released today by the National Institute on Retirement Security, Fortifying Main Street:  The Economic Benefit of Public Pension Dollars in Small Towns and Rural America. The report is authored by Dan Doonan and Tyler Bond from NIRS, along with Nathan Chobo from Linea Solutions Inc.

The research illustrates the impact of benefit dollars from public pension plans according to several different measures: as a percentage of GDP by county; as a percentage of total personal income by county; and by categorizing counties as metropolitan, small town (micropolitan), or rural. This study builds on previous research, adding significantly more states and examining data in 43 states from a majority of public pension plans in the states.

The analysis indicates that less populated counties with smaller economies experience a greater relative economic benefit from the flow of public pension benefit dollars into the county as compared to more populated, urban counties. This larger relative impact helps to sustain the economies of small towns during this period of economic transition in rural America.

“National economic trends coupled with population declines have had a devasting impact on many small towns and rural areas across America. Often, the largest employer in these smaller towns is a public entity like a school system or municipality that employs teachers, nurses, firefighters, and public safety officials. These public employees spend their career serving their communities at a time when a growing number of young workers are leaving their hometowns for job opportunities in urban areas,” said Dan Doonan, NIRS executive director.

“Eventually, public employees in rural and smaller communities retire and typically stay in their hometown. Retired public employees spend their pension income in their  towns on goods and services like housing, food, medicine and clothing, which serves as a stable source of economic activity in smaller communities. Our analysis clearly indicates that pension spending provides a substantial economic impact on struggling small towns and rural communities across the nation,” Doonan explained.

To ensure accuracy, the data for this report was collected directly from each pension plan.